The mobile application is one that we’ve only lately discovered but has impressed us greatly. Roccat Power-Grid is a PC remote control app for Android and iOS smartphones. A few of its more popular uses are media controls and PC performance/temperature statistics, but the possibilities are practically endless.

Elite: Dangerous’ grid was one of the first to be made accessible as a grid for this program, although it’s completely editable. Set a grid of touch-activated panels to perform a mouse or keyboard operation on your PC using this program. In a similar vein as Voice Attack, it serves as another method for a commander to carry out the various complex duties they have at their disposal.

For sure you’ve seen this before. Great sci-fi games and movies often feature a moment in which the captain of a ship issues a few orders to the ship’s computer, who then promptly follows through on them. They could even respond — AI in the future is going to be quite cool.

Elite: Dangerous gains Voice Attack’s feature (and other games). You will be able to speak specific commands into your microphone and have them translated into mouse/keyboard commands and, if desired, a vocal response.

Let’s go a step further and see what happens. It is possible to establish a custom command to be uttered by your Windows speech-to-voice program when you hear any of these orders. Although it isn’t required, Elite’s universe will feel more real to you if you use it. Using an AI program to generate entire banter is possible, but it’s not necessary to keep it simple like simply reconfirming an order. Amy, my ship’s spoken AI, responds, “Yes, sir?” anytime I call her by her name.

It’s the tiniest details that make a big difference. 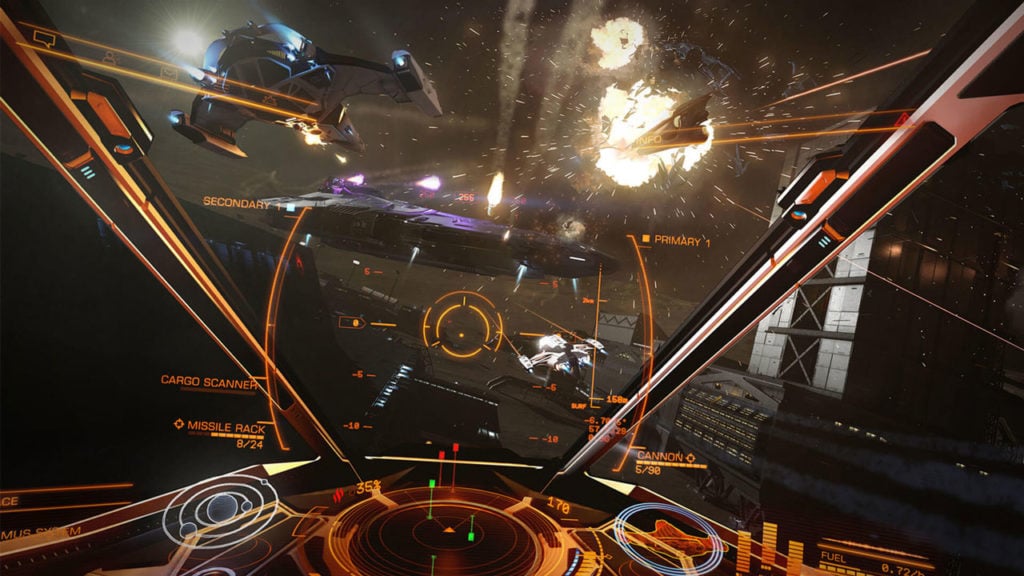 TrackIR, like Voice Attack, isn’t unique to Elite: Dangerous, although it does serve to enhance the game’s immersion. This will allow you to glance about your environment using only your head. As TrackIR will track the position and rotation of your head to match that in the game. Look to the left, right, or up or down, and your pilot will follow your instructions.

TrackIR is available in a variety of forms and flavors. With an infrared gadget that attaches to your headphones or headgear, you’ll get the best experience, but it’ll cost you a lot of money. It’s possible to get a similar effect for free, and it’s astonishing how effective it may be.

This one is a modest tweak, but since your existence in Elite: Dangerous (at least for now) is locked completely within your cockpit, its effects are extremely substantial. In order to distinguish between different portions of the HUD, Elite uses their characteristic “star” orange hue, with varied shades.

No matter how much I enjoy orange, my cockpit could use a different set of accessories. However, there is no method to alter this in the game itself. However, this isn’t a problem, as the answer is found in the game’s INI files, as is the case with many.

You don’t have to worry about breaking the game while you’re tinkering with its internals. Commander Arkku has created an easy-to-use webpage that not only allows you to experiment with recoloring the HUD in advance but also explains exactly what you should do. It’s as simple as finding the HUD colors you prefer, then copying and pasting that text into the XML file. Done and dusted.

Where Does Lost Ark Take Place?