Nightingale, the Victorian first-person survival action game, has had its early access launch pushed to the first half of 2023. The game is the debut by Inflexion Games, a team consisting of former Bioware developers, including ex-general manager Aaron Flynn.

In a message posted to Twitter, Inflexion explains it delayed the launch for two reasons. One, it’s migrating the game to Unreal Engine 5. Two, it needs the extra time to ensure it’s polished and packed with content before players can begin testing it out. You can read Inflexion’s full message below (enlarge by clicking the image). 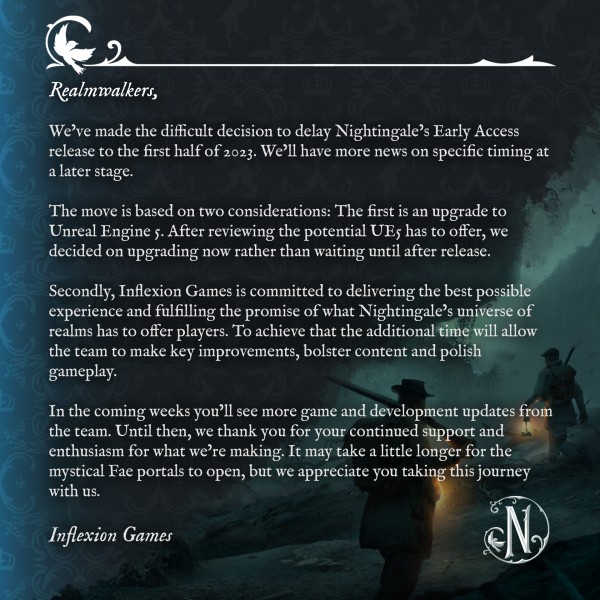 Nightingale debuted during The Game Awards 2021 and is a PvE crafting and survival game that can be played alone or in co-op. Players find themselves stranded in a Victorian Gaslamp fantasy world connected by a network of portals. To survive, they’ll have to harvest materials such as wood and ore to construct weapons, equipment, and buildings. Jumping through portals transports players to new biomes such as deserts, swamps, and jungles. Nightingale’s appearance during this year’s Summer Game Fest introduced Realm Cards used to unlock new areas and influence the type of content, such as enemies and resources, they contain.

So far, Nightingale is only confirmed to launch for PC via Steam.

GoldenEye 007 Documentary, GoldenEra, Spotlights The Development Of The Influential FPS

Cult of the Lamb Review